It’s a secret to everybody: A Link Between Worlds is a better game if you’ve never played A Link To The Past.

Reviewing a Zelda game is hard. It’s a flagship title from a flagship company, so it’s already better than 95% of everything else out there. But its also got such high expectations from most of us players that we’ll endlessly discuss the minor things that bother us even while the game is basically perfect. But this time around’s a little easier, and here’s why:

A Link Between Worlds is one of the best Zelda games ever made.

It’s better than many of the recent 3D Zeldas on major consoles because it isn’t mired in cut scenes. Story is linear, so games with a large story component necessarily become linear as well. But in ALBW we get to play a game. We get to go do stuff immediately. Zelda games have always been about exploration and discovery, and a linear, story-tracked game isn’t very exploratory. Almost all of ALBW is nonlinear.

It’s better than the other 2D Zeldas, including A Link To The Past. This is partly because the 3DS’s hardware ability with stereoscopic vision is put to great use, especially in the water temple where six floors compress to two. It’s partly because the music is clearer. It no longer sounds like an orchestra at the bottom of a well. And it’s partly because its scant story, most of which you’ll see nearing the end of the game, is surprisingly affecting considering how much time we spend in the game obsessively collecting all the items and uncovering all the secrets.

But what really makes ALBW a must-buy is Link’s ability to turn into wall graffiti. That ability, that one ability, is not just unique in the entirety of the Zelda series, but in all of videogaming. It’s an ability that really requires a fantasy world with open-ended kinds of magic. It’s a puzzle designer’s dream because no other designer has used up any of the good ideas. It causes us players to see the physical world in a different way. And it meshes well with an action game, providing a slight break from the usual (even in the game’s sounds, gone all tinny while on the wall) yet still serving as a clever way to dodge arrows and whatever. Good gracious, what’s not to like?! 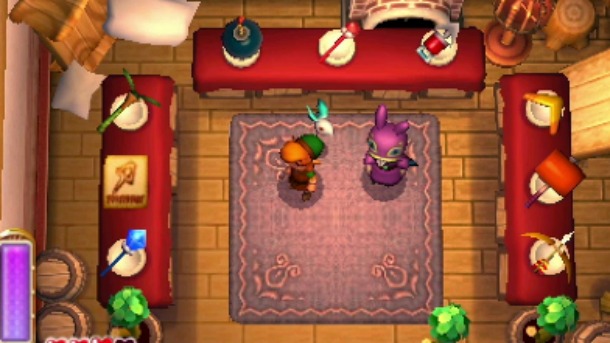 It actually makes me sorry I played A Link To The Past. Half the fun of a new Zelda game is exploration and discovery, of never knowing what’s around the next corner, and if you’re familiar with this game’s 16-bit prequel you lose some of that. The overworld is familiar, the bosses are familiar, and many of the items and interactions in the world are familiar. Combined with the item-rental system, where all the dungeon’s toys are put into a shop early in the game, you lose much of this element.

However, that same rental system does provide some value. Ever get stuck trying to solve a dungeon, and hence stuck in the entire game? Now we can go work on the other dungeons in the meantime. Ever want to play through the whole game with the Hookshot, rather than waiting until the umpteenth dungeon to finally acquire it? Now we can. We do lose the surprise of opening a large dungeon chest and getting a new toy, but considering most of these toys have appeared in many previous games, that isn’t such a surprise any more.

I’ve heard two different stories on the game’s difficulty level. Newer players may find some challenge here, but I come down on the other side: the game is quite easy. I died exactly twice throughout the first quest, both times to a minor enemy I simply refused to believe dealt that much damage. I’ll admit the final battle had me down to my last half-heart since I came into it unprepared, but a tense final fight makes the victory all the more epic. Upon restarting the game in “Hero mode” Link takes about triple damage from everything, and I felt that balanced better. Also: learn to shield.

How The Wii U Can Be “Saved”

3 thoughts on “Review: The Legend of Zelda: A Link Between Worlds”