This is not something I’d thought I’d say, but if you’ve ever wanted a modern take on Rampart, it’s basically here. It’s got mostly what I’d expect and a lot more than I would have thought to add. You still go through the basics of building and shooting, but I guess if you’re going to modernize a classic, you might as well go whole-hog and add dragons because… well… dragons are cool. Does that help me get passed the lack of multiplayer though? Let me break it down for you.

Let’s recap. If you haven’t played Rampart, I wouldn’t honestly be surprised unless you’re as old as myself or really into retro gaming. Then again, if you’re on this site, there’s a fairly good chance you fall within one of these two categories. If not, welcome! I played Rampart on my NES back in the day. My copy still works although I believe the copy I currently have is a friend’s and they may not remember that fact. (I won’t tell if you don’t.) You start out by placing your turrets in your base then spam bombs at your enemy base’s walls while they shoot at yours. After that comes the rebuilding phase where you quickly place randomly given walls to rebuild your (hopefully larger) base and then (if you connected all of the walls) you get to place more turrets. If you didn’t connect the walls you didn’t get to place turrets because you’ve lost. There was also a single-player mode where you built your base and shot at moving ships and landing parties. Both were fun.

In comes Sky Cannoneer. I can’t lie here, if you’re like me and only ever played the multiplayer part of Rampart on the NES, then the lack of it here will probably massively disappoint you. That being said, the improvements to the basic formula (if you can remember them all) are pretty awesome. Element Games took a winning strategy and ran with it and they didn’t stop once they made it into the end-zone. The phases are still the same. Build/place/shoot/repeat are still what you’ll be doing but they’ve added leveling up and tech trees to spice the game up a bit. Did you ever wish you could spawn a tornado or have your rockets randomly launch cluster bombs or how about flinging a giant boulder at your enemies base? How about a dragon? There are a lot of different options to try out. Right now I’m playing with the Volatile Mix buff to scorch the ground my bombs land on so they can’t rebuild as easy because the Cluster Bombs were a bit too random.

The story follows a group of heroes that are taking on those who would oppose the Sky Lord and his Navy. In your outings you’ll start to notice a pattern that I’ve seen a few times in other games where you start to wonder if you’re the baddies. I’m not going to stay on this for long because I don’t really want to give any spoilers. To be honest, the gameplay holds my attention more than the dialogue does. That’s not to say it’s a loss because I’ve had a few good chuckles here and there (I’m looking at you Fen), but there were times where I just wanted to get back into the action and try to do better rather than figure out the politics of the campaign. Having a campaign that doesn’t grip my soul with curiosity doesn’t bother me too much as the main part of the game is blowing things up and Sky Cannoneer does that well.

Along with all of the cool abilities gained in the tech tree, you can also pick different options for how your forts work. I tend to go with the speed upgrade where you cannons cool-down is quicker. There are others that give you an extra starting cannon, another where if your walls fall you can still shoot for a turn and one where I assume they give you better pieces in the building phase. (That actually sounds really cool and I’m not sure why I haven’t tried that yet.) There are more, but all of these cost resources to research that you get from your victories and unlocked when you level up enough. If you enjoy playing the game, you won’t be without options for long. 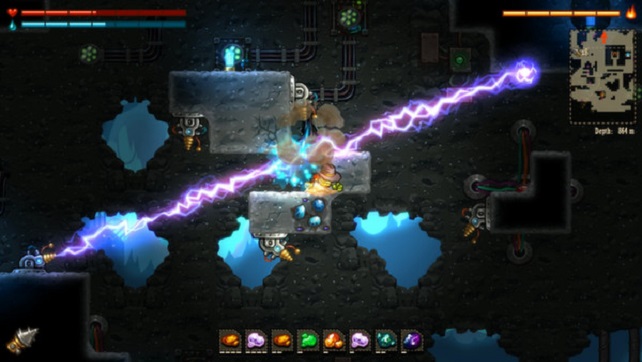