Yes, I did own Hyrule Warriors on the Wii U. I didn’t pick it up on the 3DS though and that is where all of the DLC (which I don’t normally buy) unfairly went. Now, I’m not the largest fan of all the porting of Wii U games over to the Switch, but there is some good that comes out of it. The obvious one is for Nintendo proper who will profit from people picking up a game they haven’t played yet because they either didn’t pick up a Wii U or simply didn’t pick the game up when the Wii U was in its “prime”, so to speak and then those of us who double-dip. Those of us who had a Wii U can be justified in feeling a little bitter because they are releasing the games we already own again and at full price no less. I understand that. For me, however, I really enjoyed Hyrule Warriors originally and was upset that (while I don’t normally buy DLC as I said) they didn’t give the Wii U owners some great content and some of it looked rather cool! Releasing this port with the “Definitive Edition” on the end of it lets me enjoy the game again, a little shinier and with a lot more characters! Was it really worth the double dip though? Let me break it down for you.

For those of you out there that are still yet to be initiated in the Warriors series of games let me put it to you in the simplest terms (because over explaining it would be boring). The game is usually done over a series of maps (the more the better). You control one hero at a time, but if there are other heroes on the board and if the level allows for it, you can swap over to another hero with his or her own unique abilities and move on from there (sometimes you can command those you’re not currently playing as well to move too). Is there a keep you need to take from the other side or a door/wall, but you’re stuck on the other and a friend is able to? Swap and capture it; it’s as simple as that. As you’re running around you are swarmed by hundreds and thousands of enemy troops and you’ll be using (usually) various and very flashy moves to dispatch them en masse. Capture keeps and outposts to help your side spawn more guys and they will head out to “help” as best they can. Every now and then they actually accomplish something as well! (Just don’t hold your breath.)

In Hyrule Warriors: Definitive Edition they add another layer on top of the cake (although I’m sure it takes other forms in other games as well). Each level has multiple things to find or earn. There are, in typical Zelda game fashion, heart containers to find both full and quarter-hearts and also Skulltulas will appear at specific times and you’ve got to hunt them down to finish puzzles for some reason. Hearts are character specific so you’ll have to have that character in play to get the hearts you want as only they can open their own chests or earn it as a reward at the end of a map. Now, on a basic level, the levels are played out the same. You’ll be thrown into a scenario and have to capture enemy keeps while stopping them from taking yours and eventually have to take down a boss either in a keep or a giant boss wandering around the level proper be it a Ghoma, Manhandala or Dodongo (there are others, but those of the main ones that will be thrown at you the most).

Does it get repetitive? The short answer can be a real, definite yes for some. I can honestly see how they can view it as such as well. There is a bit of repetition. In fact, the formula is simplistic enough that my three and five-year-old both play it together in co-op. Granted the three-year-old sometimes will get lost easily and wander in circles yet still be accomplishing something in her mind, but that’s because she’s three. I can, however, let them play without too much help. There are levels that require you to stop some event or set of baddies before time runs out or they capture something, but other than that, if they stay on easy or normal they can win. That’s not to say that they will unlock everything though. If you enjoy the combat, there’s plenty of other things to accomplish in each level until you’ve completed it fully. If the thought of a button-masher, horde-fighting game doesn’t sound up your alley, but you like the Zelda universe, it may still pull you in! Hell, I’ve come to love the Tingle character and he’s always bothered me.

The harder the difficulty you pick for each level will decide what kind of rewards you get weapon wise. You can augment your different weapons to help boost specific combos, drop more hearts, lengthen power-up duration, get better crafting materials, amount of rupees to receive and much more! I found myself gathering a plethora of options so I thought I could craft a great farming weapon and one for damage for each character. The thought is nice, but when you want to have two for every character, it gets pretty daunting. I’ve made a few weapons with the buffs to more slots on weapons to fit more things into them, more stars making the damage higher, better quality materials and rupee counts. The issue is that weapons are hard to come by though. If you want better materials, that seems to be easy enough because you can choose who you fight based on which level you play. Weapons seem to be more RNG and with the more characters you unlock, the chances of getting one I want seems to get slimmer. I wish it was like materials where you fight whose materials you want to drop, but I’ve received weapons for people who I wasn’t playing or fighting against. (Insert head banging against wall sound here.)

There are basically two modes and the story mode, I feel, speaks for itself. There’s a spin-off of it called free play or some such and it’s the story-mode, but you are not confined to level-specific choices. (If you’re playing co-op, the second player can always pick whoever they want.) The story is pretty interesting, however it’s the typical Zelda-esque bad guy attacking with an evil Ganon presence in the background, tri-force stealing, and good guys triumphing. There are levels where you’ll play the bad guys against Link and friends too which was different and cool because Ganondorf’s abilities are pretty sick. The other mode is Adventure Mode where you explore maps based on previous Zelda games and there are numerous scenarios that if you want to progress, you’ve got to get a high enough score and if you want to unlock all of the hidden items you’ve got to play specific characters. Scattered throughout the map are various Zelda items like the Hookshot, Ice Arrows, Bomb and Digging Claws and more. You’ll need these items to reveal/unlock rewards like more playable characters and new weapon types. Another great thing here is that there are lot of these maps so there’s tons of content!

There is the only area that I’ve got an “issue” with. There’s nothing inherently wrong here, but the game scales up the difficulty in very specific ways. If you want everything from all of the various map locations, you’ll need to be able to play all of the characters including the ones you may think are fairly week or wrong for the task. Two main examples I’ve run into are Ghirahim and Agitha. Ghirahim is an issue for me because his moves are awkward when I compare them to… well, all of the other playable characters. That may endear him to some, but not to me. I’ll pay rupees to level him up and hopefully get his bonuses eventually. Agitha isn’t much of a problem too often, but there are Quiz levels where you’ll be given a not-to-difficult question and have to kill one of two opponents. If you pick the right one all three times, you get an A ranking which is what you want. Agitha’s moves tend to be a bit more AOE so sometimes I’ll kill the wrong opponent while attacking the right one. It’s rather frustrating. 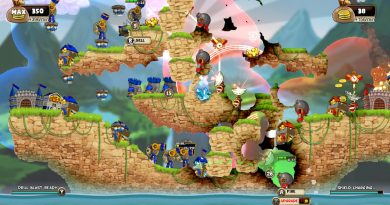