“Genetic engineering and civil unrest loom over Galixia. You are the Chief Curator of a local News Channel. You are the HEADLINER.” I’m not completely sure what to think about HEADLINER. With comments like “Out-Trump the Trump with your own #FakeNews!” It feels like a heavily politically motivated videogame. That’s not necessarily a bad thing especially if you’re in the mood for it. HEADLINER has you picking what news stories get reported and which ones do not for roughly a week. Then on your way home, you see the reaction to your paper’s choices. How well does it play out? Let me break it down for you.

The politics are a bit of a mush if you were trying to compare them to some of the goings on lately. There are a few different ways to play the game based on how you actually want to play your Headliner. Do you want to fully cover the war with truth? Do you want to focus on this upcoming festival and ignore other topics? Do you want to try to bring the modified people and unmodified people together or drive a wedge between them? There’s virtue signaling in the form of diversity and conflating left and right sides of the arguments of things. I don’t really want to say much more on this topic because politics take up a lot of the airwaves these days and for someone who’s looking for escapism, this game was a little bit rough to get through. Although once you beat it after having read all of the options, it’s easier to simply run through the options and see the different outcomes and endings. I’m grateful for that because I got a few more achievements out of it. (I’m going to have to admit that I like those eventually. Today is not that day.)

Another thing that bothered me was the two option system. When conversing with your significant other and your daughter, maybe I kept reading the options incorrectly, but it seemed a little difficult to appease both of them. I was either upsetting my daughter and placating my spouse and her hobby choices or upsetting my wife by being a total douche and sending my daughter into a spiral of hatred. I think the ending I had that I most appreciated was when my spouse loved me, but my daughter had a tantrum. I can live with that. It wasn’t the only place that simple options bothered me because I also needed to pick something up (food wise) for dinner, but the store was blocked off. You know what wasn’t close? The grocery store! I’m sure they would have something, but that was not an option. 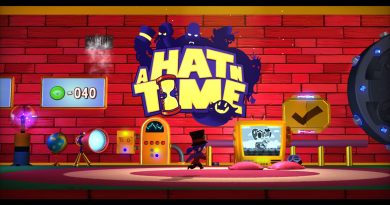 (Review) A Hat in Time