Have you’ve ever wanted to be Santa Claus and try to deliver gifts without being seen? Well now you can! From the developer who brought you Dev Guy, that indie game you may not have heard of, but was still rather popular (80% positive on Steam) comes another game that’s trying to get through Steam Greenlight as we speak. I’m surprised nothing like Secret Santa has come up on my radar before now. A stealth Santa Claus game is a great idea and I was pleasantly impressed with how fun this misadventure was.

You start out with three lists: Nice, Naughty and Krampus. The same basic principles basically persist throughout, deliver the goods, grab the extra goodies and get out safely. Simple and efficient. There is a progression of difficulty as you move from list to list where you’ll move from dodging dogs (at least I believe they’re dogs, my wife thinks that they look like cats) to dodging bear traps. It’s all done in the same cheery style so it’s all fun and games whether you’re being shot at by Grandma or caught by a child Solid Snake style. It takes some getting used to how you control Santa and figuring out how you’re detected. Some things notice you by your shadow while others are by simply walking into the cone of sight. There’s your helpful hint for this post.

The Krampus list varies slightly. You’re not exactly going around snatching up bad children or beating them with sticks as I was told some were saying it should be. No, in Krampus mode you sneak into people’s houses (still as Santa) and destroy the Christmas tree and get out. This mode incorporates all of the other challenging elements into it and includes additional obstacles that I’ll let you experience and enjoy for yourself without spoilers as it’s a nice continuity of difficulty. It’s harder, but not impossible, just the way I like it!

In the end, I did defeat all of the levels and nabbed all of the milk and cookies that were to be had. There were a few oddities, but knowing the developer personally means I was able to go and lament to him and be heard. There isn’t much to complain about though. A lot of the time, when I was having an issue, it was usually due to my impatience. You could see how to do something, but get the timing wrong. The same song being played throughout could almost be a complaint, but at the same time you don’t truly notice it that much. There are so many different factors to pay attention to like being spatially aware of your surroundings and distance to objects (so many traps), the music added atmosphere and did it well. 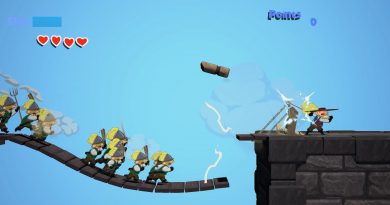