I feel that I was one of the few people who really enjoyed the first Watch_Dogs game. I played it when it first came out and I had to play it on low settings simply to get it to run with all of the PC issues. In the end, I enjoyed that game a ton and was looking forward to another iteration of the franchise since it seemed like Aiden Pearce’s story was done. When Watch_Dogs 2 was announced I was excited. When details were announced that it would be in San Francisco and early photos seemed to show that it will be full of hipsters, my enthusiasm was mildly crushed. Not that I dislike either of them, but it was such a departure from the original that I was hesitant to be very excited or hyped. It felt like the transition from Batman and Batman Returns to Batman Forever and Batman and Robin. You could be excited for more Batman… but that’s not the Batman you wanted. I recently completed the game and did it live up to my expectations or did it break the low bar I had set for it? Let me break it down for you.

Unlike the original, you can actually hack everyone in Watch_Dogs 2. This is extremely welcome because it felt like a stupid limitation to a game where you were supposed to be some super B.A. hacker. Now you can and… it’s not really worth it. Everyone seems to be in the “decent person” category so there aren’t as many pervs or malicious people walking the streets this time. So to put forth the effort to steal $23 to $60 from random citizens feels worthless especially since you get so much money from completing missions and finding random bags of cash. I’m still glad they included it. There are more options so while you may not want to steal from them, you can call gangs on anyone or even falsify evidence to have police show up to arrest people to create a distraction. That would seem to be the main use of the phone hacking system. Distraction plays a major role depending on how you want to play this game.

As for how I went about playing Watch_Dogs 2, you can probably guess if you’ve been around The Backlog for any amount of time. If there is a stealth route, I will take it! For good or for worse, I love being a ninja. That and usually being the unseen ninja jives well with my inner paladin that doesn’t really like to kill a lot of people in videogames. They may have worn me down in Tomb Raider, but I stuck with it through the end of Watch_Dogs 2 and it was really the end where I got my tactics down the best and it really shined. Sneaking and distracting with your phone to create weird (I assume) texts to people was the most fun way to get through the levels. I would distract then take them down and I would be trying to knock everyone out. I originally went with the taser because it was quick, easy and ranged. One thing they don’t tell you though, is that they will eventually get up and be extra cautious. You have no real choice but to use the power of the yo-yo!

Yeh… I said that, the power of the yo-yo. So with stealth being my main approach to all combat in this game, it really stands out on how the melee combat is done differently. In the first you at least had a collapsible baton to use, but Marcus uses a yo-yo? I’m assuming that it’s made of steel or unobtanium because you knock people out easily with it. Another bonus here is that you don’t have to upgrade your melee attack. Want to knock out a guy with full body armor? You can do it! It’s very satisfying. It’s a combo of melee and phone static hacks that make a fun, flowing melee fighting experience. On the same note… your main weapon is a yo-yo. I’m not going to lie, that’s kind of silly and a little stupid.

The plot is a bit of a mess for my tastes. It’s another story set in the “big brother is watching you and is about to overstep his bounds” area. This time the fight is done with followers downloading an app to gain and use the combined processing power to eventually take on Blume. (Remember them from the first game?) Even then, it didn’t really seem to play that big of a role. I never really remember that being something that came directly into play; it was more of a way to describe the leveling system. It was funky. I felt like doing the side quests fleshed out the world a bit more. The main story quests were fun and well laid out, but not very memorable. In fact, the only thing that really was memorable to me was the exploration and finding hidden things. I still remember the ending scene to the first though…

One of the main things that stood out to me the most was the characters interaction with the average citizen. Not hacking or running them over with cars, but walking, running or driving by them. I really hope this is just about the worst representation of a city done ever because if not, San Francisco sucks. Almost everyone is an overly sensitive jerk. Some apologize when you run or walk into them and that’s fine in as much as it was clearly my fault at times, but when you’re a few feet away and they jump out-of-the-way and swear at you… well it’s simply rude. I ended up punching random people in the throat because they would start swearing at me and it got annoying. I even saw someone was getting beat up by another person and I would save them and the person I was helping would swear me out for punching a person that they forgot was about to wallop them… so I punched them in the throat too. This game didn’t bring out the best in me so most of the time I did my best to ignore random people.

The last thing I’d like to hit on is the multiplayer. I spent a good chunk of time in here hacking other people. It was like a fun game of cat and mouse. That is, until I discovered the dark side of it. Now, keep in mind that this was all voluntary, you could just ignore them, but it’s very intrusive. I went around just looking for people to hack all the while trying to find that ultimate hiding spot and there were a few, but a lot of the time you had to make them yourselves. Once people started to get better and level up, there were a ton of tools to use that makes hiding very difficult unless there is a lot of verticality going on. Then it turned on me and I was in the middle of something and someone started to hack me and it got really annoying. Was I that annoying to other people? Probably… and that killed the mood. 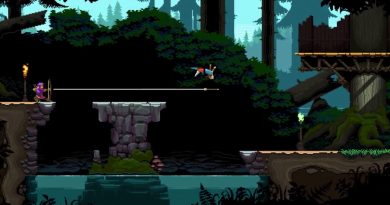