When I first saw Spoiler Alert, the book was judged by it’s cover. At this point in life I should be over that by now, but what are you going to do. As the name implies, you start Spoiler Alert at the end of the game. It’s a counter intuitive romp filled with unkilling baddies and uncollecting coins. You start by defeating an evil looking bunny and get to the princess! That’s when the real game starts.

What ensues is a basic platforming game with nothing super special until you reach the end. I know that seems a bit harsh, but other than the quirky artwork and the fact that you are a chili pepper, there isn’t anything much different other than the main draw of constantly running backwards. That is a different approach to how I’ve been playing platformers my whole life. However, that backwards challenge is conquered after the first half of the the third world (which is the first world you play). The rest of Spoiler Alert felt more like a practice run for the end game.

After you’ve unbeaten Spoiler Alert, a few more options open up to you. You unlock an extra world called Mariachiworld and Speed Runner Mode. Mariachiworld is a set of ten levels that are tougher than the original worlds (thirty levels each, why only ten here?). They did have at least one level that took me more tries than the norm to get gold (unsurprisingly the last level).

Speed Runner Mode is a different beast entirely. While the other levels can be tried and retried again and again fairly easily, you won’t be grabbing gold that easily this time. You’ve got to make it through the entire 90 levels without making a single mistake to achieve gold. After one mistake you’re down to silver and so on. It’s tough for me to decide if I’m just going to restart and try for gold or just finish to get practice with the rest of the game. So far, I’ve just restarted, but I’m fairly sure I’m going to try to get gold one of these days.

tinyBuild Games also allows you to build and share your own levels. Think you’ve got what it takes to make the cruelest level out there? Well, this definitely gives you a chance. You’ve got all of the tools and toys in the game at your disposal. It’s pretty simple to use, but I’m sure if you don’t want your level to be just another shovelware level, it will take some practice to get that perfect level out of your head and onto the drawing board. 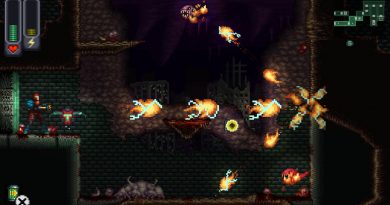