So I’ve been hyping this game quite a bit and now it’s time to see what I think of the demo that was recently released on both the Wii U and 3DS eShops.

This is the demo to try if you’re going to pick only one of them.  This version shines like a polished version of the Wii game.  Controls are extremely similar to tri (which makes sense) and you can use the Pro controllers… both of them.  How cool is that?  However, I would poo on that idea though because the use of the touch pad is so awesome!  All the emotes, inventory, and convenient map information is all right there in your hand to use?  It’s so good.

The only problem I had with it is that the controls were a little to loose with the camera.  I’m not sure if that’s the word I’m looking for, but when I turn left or right the camera just flies!  I would also like to make the trigger buttons on the part of the GamePad that juts out be the ones to use, the buttons on the top shoulders just feel awkward to press when playing Ultimate.  I had one more issue with the camera, but all that could be fixed if they allow sensitivity options and invert camera options in the retail version of Ultimate.  Oh, sensitivity… that’s the word I was looking for lol.

I don’t want to dog on this version too much, but if I were to compare it to the Wii U one, I would admit this is an easy 2nd place.  While the controls were similar to the setup with the Wii U’s GamePad, the 3DS is not the same size as a GamePad.  The controls reminded me of Kid Icarus and Mario Kart.  Other than I hated Kid Icarus, playing both for prolonged periods of time made my left hand cramp up.  This is somewhat solved by the ability to not use the left trigger because there is a D-pad on the touchscreen.  This may seem counter-intuitive to use at first, but if you’re having an issue with the camera on the 3DS version, try using the touchscreen D-pad.  Give it some time and it’s worlds better.

The camera was an issue here as well when I was underwater.  On the ground, using the touchscreen D-pad was more than adequate.  Underwater is a different story though.

I tried using a 3rd party peripheral to see if having a larger grip on my 3DS would help and it didn’t really.  The best advice I can give is to just not use the left trigger while playing on the 3DS. 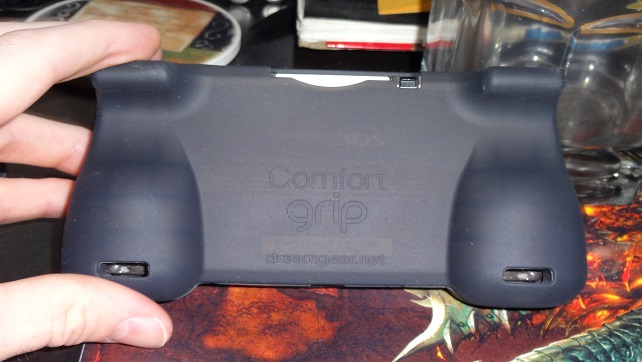 Using the XL felt just like the regular 3DS, only it was easier to not have my hand cramp while using it.

Over all I’d say that the demo was kind of a bad demo of the Monster Hunter game itself.  It was more of a combat demo than a demo of what the game is like in total.  I loved the whole Wii U experience, but the 3DS experience left me wanting.

My buddy says that if you can’t use the CirclePad Pro with the retail version (since the demo says it’s not compatible) he probably won’t be picking it up.  I don’t care too much for the CPP, but I will have to seriously think about picking MHU up if you can’t customize your controls, that’s for sure.  If you can then awesome.  If you can’t, I may pick it up, but I will ONLY be playing the 3DS version for land battles and won’t touch it for water fights.  That is so unfortunate that I’d have to make that distinction.  I kind of hurts me in my heart-shaped place.

There you have it though, the good and bad of the demo of the game I’ve wanted so bad.  I hope that you found it helpful.  I’ll be reaching out to the Capcom rep about the customizable controls, when he hits me back I’ll edit this post with a note at the end.

Also, in case you haven’t heard, Monster Hunter Ultimate will work cross region now with Europe and will have off-screen play with the Wii U GamePad.  Also there will be “additional free of charge downloadable quests” available at launch.  They’ve made note of a software patch in April based on community feedback so I’m kind of curious on what they are changing.  (Please please pleeeease Capcom, let me customize my controls!)