So here we have a “… blatant rip off of Banished. I can’t believe this is legal.” game that is currently getting mixed reviews on Steam. Is this accurate? Does that make the game any less of a thing? I’ll put this on the table for you readers: I haven’t played Banished. I’ve had it on my wish list for a while, but I haven’t got around to pushing the button. Life is Feudel: Forest Village does look similar and I got a chance to run around and make a village myself. I can’t say whether or not it’s a copy of Banished as much as WoW is ripping off Warhammer. It’s in a similar genre and setting and I’m going to review it on its own merits. There is a difference between clones and being in the same genre and I don’t really want to get into that argument. Did it stand up to my “is it fun to play” tests? Was it all just a shallow place to build or a survive fest and get boring soon after? Let me break it down for you.

The first thing that stands out the most about Forest Village is the difficulty. The crazy part is that the more I got used to it and was able to expand my village it got even more complicated and difficult as the variables increased. I think I had five or six villages that all fell apart and crashed before I even got one that was able to survive. One of those attempts lasted for quite a while until I made a mismanagement in how I allocated my resources and lost about ten plus people in a winter. I struggled with it for a while not willing to give up on what was a great looking village and in the end I had to give into the obvious: I had lost that village too. One mistake can literally spell your undoing. In addition to Forest Village being a city builder and resource management sim, I would also like to put it in the roguelike genre as well. My friend was put off by the comment, but I’ve had a few villages now that were done in by a single mistake. I should have started to farm quicker or a craft a specific item. All the choices seemed like the right choices at the time though… and that’s the worst part.

Forest Village, as a roguelike, has its challenges. It’s like a puzzle you’ve got to solve one step at a time lest you are forced to start over again. Build up to a certain size and then be able to maintain life at the current level and then expand from there. Slow and steady really does win the race here (although I always play at max speed). The times I’ve gotten the farthest are the times I took my time and was being very methodical about my choices. Right now my village is about 52 years old (which I think is pretty good). I’m fairly sure others could have made more progress in the same amount of time, but I’m still figuring out the balance and how the game mechanics work.

There are still bugs that I’ve dealt with. In the game, there is some weird stuff that will occur randomly and is frustrating because things will look fine, but not work properly. A few examples: I finished building a stone road around a home and then my villagers who lived in said home couldn’t find the door which means they won’t eat or get warm in the winter and die. By simply not connecting the road all around the house, that problem didn’t occur. Another time, the orientation of a building stopped people from being able to enter it and they were stuck in a “must get in this building through a wall and finish my job” mentality and wouldn’t go home to get warm and so they died of hypothermia. I destroyed the bakery and made it again facing a different direction and they were able to find the door this time and live.

One of the biggest hurdles in this game that will beat you mercilessly if you’re not paying attention are the seasons. More specifically winter. Make no mistake; winter is coming. When it officially hits, all of your non-harvested crops die. You’ll lose any extras you could have had if you don’t start picking.  It can happen sooner or later than last year and can last longer or shorter than the previous. It’s almost like… real life? Which is fine as long as you understand that. When spring hits, you need to be ready! You also need to be watching when fall is ending so you can tell your people to get on it and maybe even take over a few additional units to help with the gathering to speed it up a bit. I’ve lost a lot of food by not paying attention to the seasons and then I look over at the temperature and realize that it’s 1 degree Celsius. At that point you’ve already lost the non-harvested food. Pay attention!

To expand on the “take over a few additional units” bit, that’s one feature that I really like. Sometimes your villagers will go 50 miles out of their way just to get up a hill to terraform it when they could just walk up to the base and do the same job. Sometimes it’s necessary to do this in order to kill an animal trying to eat your chickens/pigs/cows. Before building a school I would take control of my three-year-olds and go about doing manual labor and killing bears because they can’t work yet and were able to perform all of the tasks well. I figured why not; they weren’t doing anything else anyways. I also used this mechanic to take control of harvesters and make them put freshly harvested eggs/milk/apples directly into the bakeries so the bakers could use them first. Villagers will take the ingredients and then the bakers have nothing to work with to make the more satisfying foods; it’s very frustrating. The A.I. is kind of goofy like that, as it is in most games. However in Forest Village, this feature is borderline necessary. 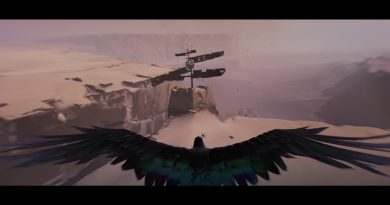