Few videogames induce that Zen-like state of bliss and harmony in motion. This one doesn’t either.

At first blush it plays like any other platformer. There’s jump and attack buttons. You can dash. While in mid-air, you can double-jump, or airdash instead. You can’t crouch, but you can slide down walls and inclines.

Then things start getting a little unusual here and there. You bump into a wall and suddenly you’re running up it. You hit an enemy and you won’t touch ground afterward for an extra beat, screwing your timing. And after quite some time passes you’ll come to realize that your umpteenth attempt to leap out from under an overhang, in order to double-jump back onto it, is doomed to failure because you’ve been playing Dustforce like it’s any other platformer.

That’s the moment when you decide to jump “wrong”, intentionally bonking your head into the underside of the overhang. And you’ll do it because this time you know you won’t fall to a death that airjumps can’t save, but instead invert your body and segue into a smooth ceiling-run that goes on well past the overhang, where you, now free as a bird in the middle of open sky, double-jump back onto the ledge with gobs of reach to spare.

This is how I learned to play Dustforce.

Dustforce belongs with N+ in a category of momentum-based indie platformers. Experience with traditional platformers won’t get you far. Normally if you press jump from a spot that allows you to reach a ledge, it will always work. But in momentum-based platformers whether it works depends on how precisely you vaulted off a ramp several seconds ago. This creates a difficult learning curve and a huge reliance on your sense of timing. It isn’t a leisurely platforming experience like Castlevania, oh no. Get far enough into the game and the only flat floors you’ll see will be respawn points. Retaining momentum is required.

But don’t let me scare you away. Dustforce is enjoyable and it really does want you to love it. The levels are only medium-length, and are connected by an easy hub-world. You can work on about a third of the game’s levels simultaneously, so you never really feel stuck. Replaying levels is fast and encouraged, allowing you to hone your skills wherever you wish. And there’s a selection of iconic characters with which to experiment the synergy of the game’s few mechanics. Such as:

When you touch a wall or ceiling while holding Up, your character will run up along its surface for a set distance, usually a few character lengths. Moreover, if that surface slightly changes its angle, it resets your allowed distance thus allowing you to run around loop-dee-loops like Sonic the hedgehog. Your janitor effortlessly sweeps away dirt this way, no button presses required.

Striking enemies with your light and heavy attacks extends your mid-air options. A successful light attack causes you to hang in air long enough to do so again. Heavy attacks are worth three lights, but delivering the final blow with a heavy will splatter trash over nearby surfaces in the direction of the attack. But most importantly, fully cleaning an enemy restocks your double-jump. Put those together and you’ll see a gang of enemies as a stairway to heaven.

Back on earth, ramps and bowl-shaped surfaces are what allow you to pick up speed, or conserve it while changing direction. Your janitor can fast-fall when you press down plus dash, which seems a useless little maneuver at first but it’s the peanut butter to the ramps’ chocolate. 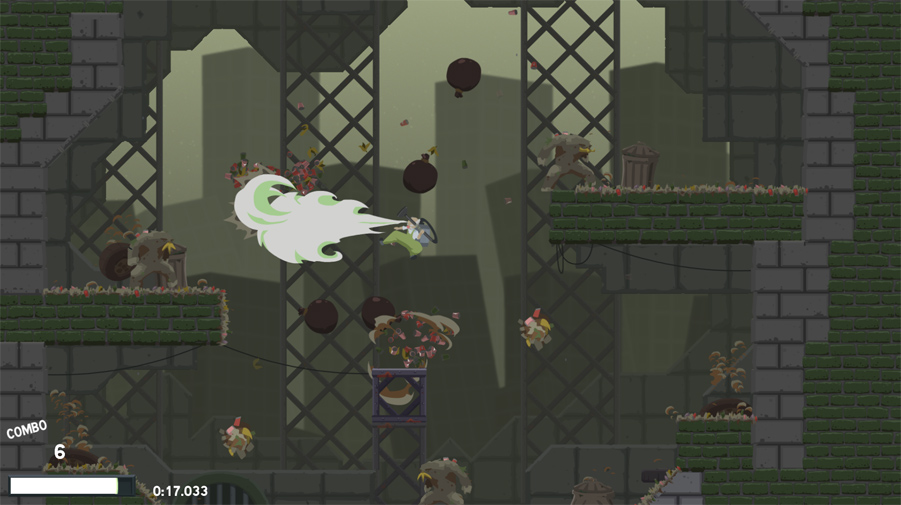 The four characters differ subtly in ability. Compared to the young man in blue, the young lady in red has a longer jump but a slower swipe. There are some levels where the jump spacing just makes her the natural fit. The old man has a higher, floaty jump with a powerful but slow vaccuum cleaner. He’s probably the easiest janitor to steer as long as no ceiling spikes or tiny wall sections appear. The short woman in purple has a small jump, but she can triple-jump as well as attack twice as fast. She’s great fun in tight spaces with lots of enemies.

A secret feature is if you press the airdash and double-jump buttons at the exact same time, you can do both at once. Normally you must choose one or the other. But take care when playing as the woman in purple: do it wrong and you’ll burn both her airjumps at once. 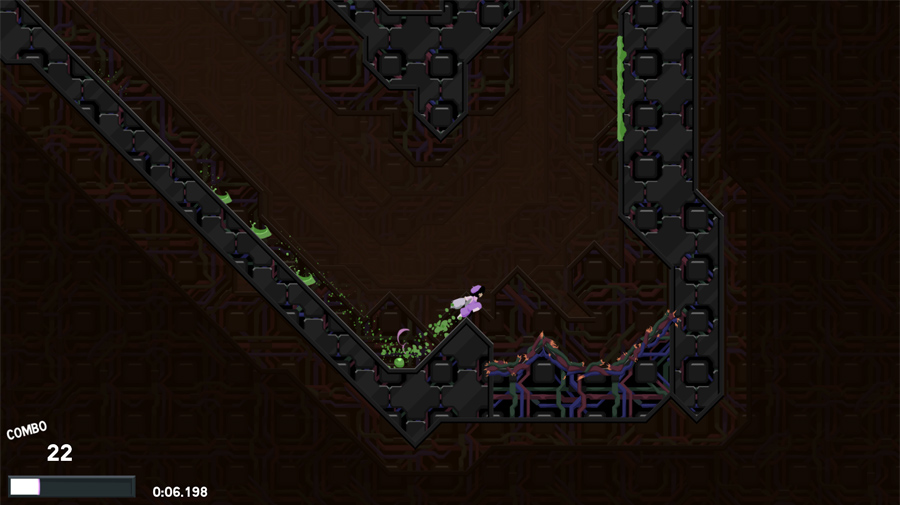 You’re scored on each level in both completion and finesse, with a D for the worst and progressing through C, B, A, and finally S. Completion is easy to understand: clean everything for a perfect score. Finesse is not dropping your “combo”, which in Dustforce means never getting hit by an enemy and never going for more than about four seconds without cleaning something. The more perfect your score, the more keys you’ll earn toward unlocking harder levels. You’re also timed, but the timer doesn’t gate getting keys so you can blithely ignore it if you wish. This is really nice, because the other two measures are more interesting pursuits anyway.

Also, the music is great. Quiet, mid-tempo electronica keeps you in that good middle ground, neither boring you to sleep nor wearing you out. Chill, without the lazy.